What are the Co-operatives & Enterprises?

There are four Co-operatives: Victor Lake, Susa Creek, Muskeg Seepee and Wanyandie Flats, and two Enterprises: Grande Cache Lake and Joachim. The land holding is unlike other Indigenous communities and groups in Alberta. It’s neither Reserve, Métis Settlement or municipal hamlet. The land is not a contiguous block but consists of seven widely dispersed parcels located north and south of the Hamlet of Grande Cache along an 80 km stretch of Highway 40.

Each Co-operative and Enterprise is governed by its own President and Board or Manager, respectively. 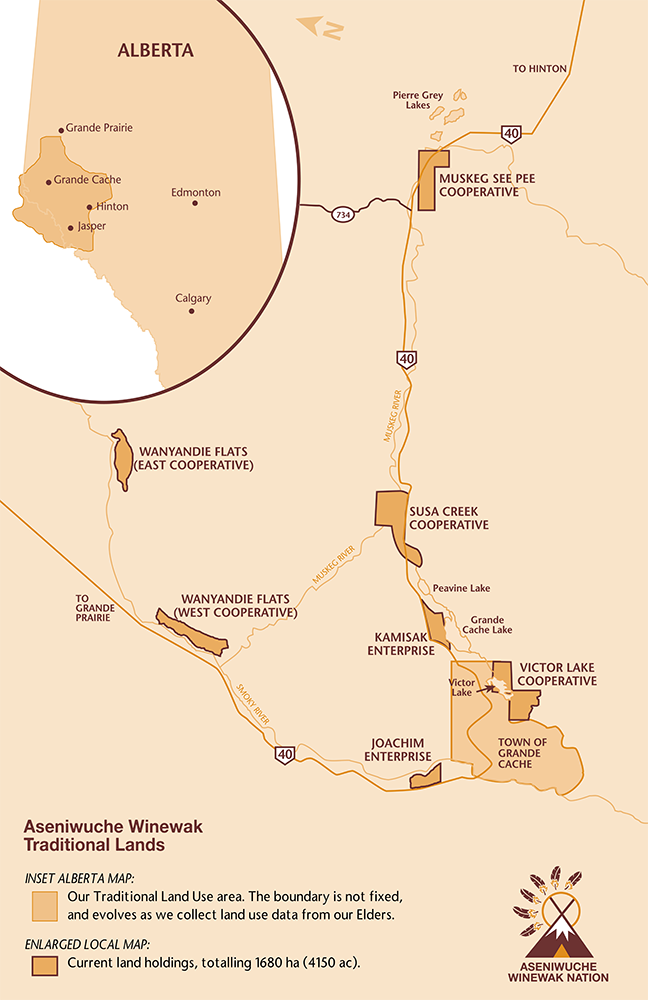 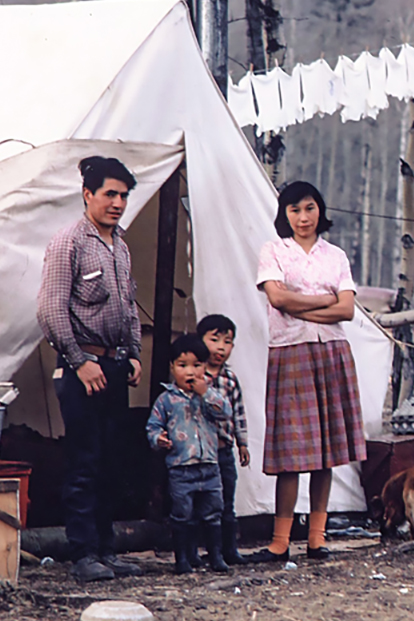 The discovery of coal in the Grande Cache area ignited industrial and residential developments that would shape the town and forever change the ways and lives of the Aseniwuche Winewak. The local Indigenous community was not consulted or invited to participate in any development decisions because they had no legally recognized title to the land. Many traditional sites, homes and gravesites were destroyed, triggering a legacy of loss.

In 1970, the Province of Alberta and the Indigenous settlers in Grande Cache started formal discussions about the land. In 1974, Land Settlement Agreements were created under the Cooperative Association Act, allocating seven parcels of land totalling 4150 acres. Based on traditional family groupings, seven landholdings were established: Victor Lake, Grande Cache Lake (Kamisak), Susa Creek, Muskeg Seepee, Joachim, Wanyandie Flats West and Wanyandie Flats East. The path to establishing the Co-operatives and Enterprises was not easy. In addition to the forcible exit from Jasper, our People challenged two removal attempts from the Grande Cache area in 1912 and 1939.

Following the 1974 Land Settlement Agreements, Alberta subsequently filed caveats on the titles to stop Indigenous residents from selling or developing the land without government approval. This created landholdings that are unlike any in Canada. The lands must be held communally and cannot be owned or mortgaged by individuals. There was no cash compensation for land now used as provincial parks, the townsite or the coal mine.

Learn more about the history of the Aseniwuche Winewak and the formation of the Co-operative and Enterprise communities with our interactive timeline. 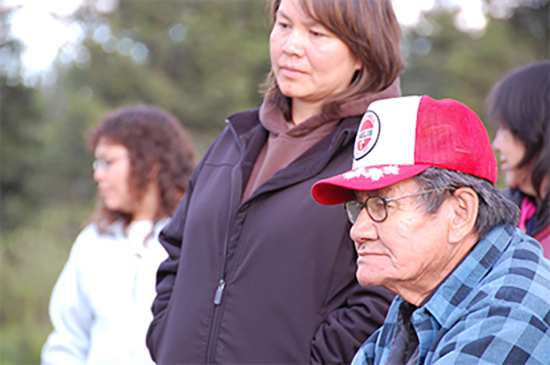 The Emergence of AWN

As the Town of Grande Cache continued to grow and living off the land became more difficult, social issues arose from systemic discrimination, lack of education and economic opportunities, struggles with culture shock and the loss of the traditional way of life. Substance abuse and suicide became prevalent issues in the eighties and nineties prompting community members to come together to formalize Aseniwuche Winewak Nation in 1994 as a non-profit society.

In 2002, AWN became the representative body of more than 400 adult members. Youth and children are considered members through their parent(s) or guardian(s) until they are 18 when they can apply for their adult membership. Our members live all over western Canada with most of the community residing in Grande Cache, Alberta. About 70% of our membership live in the Co-operatives and Enterprises.

Today, our community members continue to face challenges with housing, education and employment opportunities, generational trauma, mental health, substance abuse, addictions, loss of culture and accessing the basic needs that are afforded to recognized Indigenous groups and all Canadians. AWN’s mission is to support education, programming and representation to build unity in the community by working together to preserve the land, language and culture. The sacred and important knowledge from our Elders guide us and the youth inspire us to make a better future.